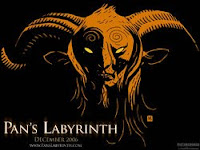 In 2006 I wrote two pieces about the magnificent film, Pan's Labyrinth for my blog on the now defunct Gaia.com. These ended up being read over 25 thousand times and being linked to and quoted from in many locations on the internet.

What follows is my initial review of the movie - I have since written part two, which deals more explicitly with the mythic structure and psychological symbolism of the film.

Guillermo Del Toro's Pan's Labyrinth is a contemporary masterpiece of traditional mythic form. Political repression, family relationships and the mythic psyche all inhabit the canvas that Del Toro paints dark with the palette of the struggle to find meaning and resolution within traumatizing circumstances.

Rurally set in Franco's Spain of the 1940's, the principle story concerns itself with a sickly pregnant mother, Carmen, and her pre-pubescent daughter, our heroine Ofelia. These two have entered the world of the coming infant's father - the archetypically evil Captain Vidal of the fascist army.

Ofelia's real father is a casualty of the war, and her new stepfather is a cruel and inhuman sadist. Carmen is clearly grasping at straws to try and ensure survival for herself, her daughter and the child she is carrying through a very troubled pregnancy. Captain Vidal cares only for the son he imagines is growing in Carmen's womb as a mirror for his pinched and hateful sense of masculine power.

Ofelia takes solace as she has done for some time in her much-read treasure trove of fairy tale books, but as she crosses the threshold into the Captain's domain the line between fantasy and reality begins to blur. What ensues is a near classic unfolding of the stages of the mythic journey as laid out by Joseph Campbell. Don't let the inclusion of the mythic and fairy tale material fool you - this is no typically superficial representation of the inner world, in which magical forces enact a Disney-esque victory over evil for the pure-of-heart true believer. Del Toro restores his mythic motifs to their proper place as the symbolic representations of a psyche struggling to come to terms with traumatic social and familial conditions while forming a nascent sense of self. We are not in Kansas anymore.

This tragically constellated family unit is installed in an old mill that has been turned into a small military base to try and squash a Red rebellion from the hills. The Captain has a huge stone basement room to himself, where he spends his non-combatant time in reverie with his phonograph, booze, straight-razor, shaving mirror, and the repaired watch his father smashed at the moment of his death so that his son would know the time and "honorable" nature of his demise. The expendable Carmen is near death in a bedroom upstairs. The kindly and noble country doctor is under instructions to save the baby at all costs. The proud and unbroken housekeeper, Mercedes, and the Doctor are in secret collusion with the rebels.

Meanwhile the aptly named Ofelia is interacting with the mythic dimension of the psyche as she struggles to survive in impossible circumstances. She becomes immersed in the fantasy of herself as a reborn princess from a world where "there is no suffering or pain." In a meeting with the Faun - a most well-realized and captivating supernatural trickster, she agrees to take on three tasks that will take us into the heart of darkness on her quest to be reunited with her lost and kingly father.

The creatures of the mythic fairy tale realm are unsurpassed in their representation, and Del Toro is playing a supremely hip and psychologically savvy jazz with his storyline here, but it is in the resonances with real world torture, cruelty and loss of innocence that he strikes his most telling (and contemporary) chords.

Pan's Labyrinth dances nymph-like, or perhaps maenad-like (the Dionysian imagery works here too) between inner and outer reality, civilization and barbarity, the loss of innocence and the perverse quest for power, nature and the unnatural repression of our humanity. Ofelia is as appropriately lost and fallible in her fantasy world as she is in reality, and her guides carry an unpredictability that is sometimes as scary as the monsters she faces.

It is here that I would like to introduce the work of extraordinary Jungian therapist and theorist Donald Kalsched. His book The Inner World of Trauma; Archetypal Defenses of the Personal Spirit uses myth and fairy tale as a reflecting pool to witness both the healing genius and the potential for pathology in the traumatized psyche.

Kalsched uses (amongst several others) the myth of Eros and Psyche as well as the Rapunzel fairy tale to illustrate his "self-care system" hypothesis of how "when human resources are not available, archetypal resources appear", and how the Protector figure in classic tales as well as contemporary psyches has also the double face of being the Jailer. In other words, the very defense that initially saves you from unbearable pain becomes the limiting factor to resolving the healing process and participating fully in a real life-in-the-world. 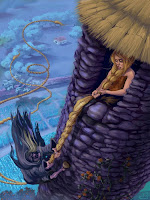 This is no small insight for a world that has lost its appropriate relationship to both the psyche and its dream-language of mythic symbols. Too often, as in the case of both fundamentalist religion and New Age spirituality, this potent symbolic language is misinterpreted as literal information or as a factual map to a world in which we escape the trials of human maturity and depth. In this case we are still trapped in the dissociative fantasy defense against trauma, instead of making the complete journey into the rich imaginative connection between the inner and outer worlds that allows a fulfilling, though imperfect, engaged human life.

This theme is echoed through the several stories Kalsched utilizes, and once grasped can be seen again and again, particularly in powerful movies like The Piano, the under-appreciated The Cell, The Fountain, Jacob's Ladder, and Fearless. It is here too in Pan's Labyrinth.

Here again is Vincent d'Onofrio's contemporary Pan from The Cell. Here's Doug Jones' Pan from the film in question. Both of these mythic character depictions carry the Archetype of Protector/Jailer of the inner-world. Here too is Sam Neil from his similar but less mythically-themed role in The Piano.

Consider this kind of work in total alignment with a 21st Century Spirituality that concerns itself with the intellect, the psyche, and the life lived in authentic struggle with reality. The movie should make you shudder more than a little- it is about the confrontation with what Jung called the Shadow - and that aint' easy for anyone, but it is the road toward a more integrated, liberated, grounded and spiritually awake self. Consider it, too, a powerful antidote to such patty-cake "spiritual" fare as The Secret and What the Bleep.

In a forthcoming piece, I will enjoy unpacking Ofelia's mythic journey and comparing it to some other myths, fairy tales and movies to elucidate Kalsched's theme of the self-care system and how the psyche deals archetypally with trauma.


For now i leave you with my soulful recommendations for those interested in life-changing and mind-opening cinema:

Pan's Labyrinth
The Fountain
Babel
Fearless
The Piano
The Cell
Jacob's Ladder {here is William Blake's painting of the same name inspired by a Biblical myth.} 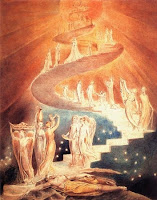 Julian Walker
Los Angeles, CA, United States
I am a writer, yoga teacher and bodyworker. The possibilities of a 21st century spirituality that is informed by science (especially neuroscience) and psychology (especially attachment theory, somatic psychology and developmental psychology) are my passion. Find out more about my work at http://www.julianwalkeryoga.com